Hello!
I found this engine yesterday and I’m so glad I did!
I’m on the look for a new engine as I want to leave unity as my main ecosystem.
Still vetting my options but Flax looks very promising!

From the time I had with it, I must say it’s really solid!
It already does 80-90% of what I need from a game engine, the general UX and tooling are great!
Everything is where it supposed to be, logical and very easy to pick up.
On most of the systems, I can just use my unity/unreal experience and jump right in which is a big thing!
(C# scripting from unity, material editor and animation tools from unreal, postprocessing from both) After a day I feel like I could just pick this up and make a game with very little downtime as I already know the systems.

However, there are a few things that I use almost all the time in other engines so I thought I’d make a list of a few stuff that are really important to me.
(Not necessarily a request, more like feedback as a game dev, take it or leave it 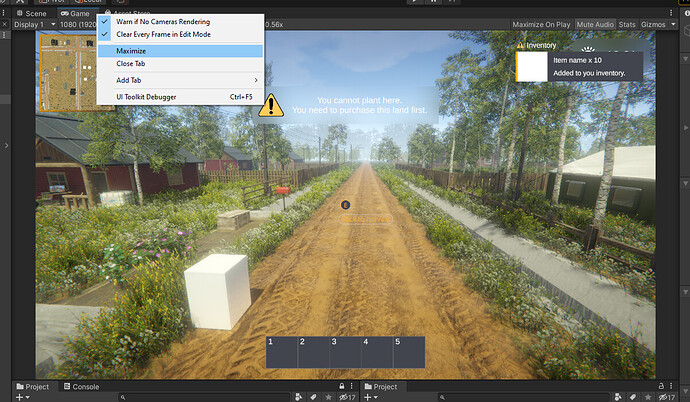 This is huge for me because sometimes it’s quite hard to grasp the scale, especially with the UI stuff.
Like I have a display connected to my PC that displays a windows or linux OS and a game engine in that OS and in that game engine there’s a window that displays the game that maybe displays a UI panel.
So yeah, I usually just pop the running preview to full screen if I work with UI.

This is also huge for me because if I use or make screen resolution dependent custom post-processing effects I need to know how it will look exactly on different resolutions.
Also, there’s a lot of expectations from players about resolutions and aspect ratios, usually, everything (UI, FOV, rendering) HAS to look good from a 16:10 aspect ratio all the way to 21:9.
Just selecting a custom resolution or aspect ratio is a huge help on this (without needing to rebuild, test it on a different display, or trying to scale a window manually to make it 21:9 ish).

Editing in preview/play mode and applying back the modifications
https://www.youtube.com/watch?v=G-QbO8IZClA
Yes, I know this might be a bit unconventional but this is huge!
Just pure rapid prototyping and you can see your changes real-time in play mode!
This is invaluable! Seriously, just watch the attached 20-second clip, stuff like this helps me to nail down a visual/design prototype for a new project in like a day but I use it all the time in production too.
Unfortunately, only Unity supports this properly.

This is more like a nice to have but since Unity implemented it saved me a ton of time because I don’t have to jump from unity to renderdoc and back to see what went wrong if I have some graphical issues.

Scrolling through long parameters is painfully slow!
https://www.youtube.com/watch?v=-7rTx5iPhns
If you have a lot of parameters (like in the postFx volume) scrolling through them is so slow that I need to move the cursor to the scrollbar, pick it and look for the part I wanted to scroll to. Wich is just frustrating because scrolling supposed to be a faster way.
Also, I really don’t like the scroll-easing. It’s not a dealbreaker but much harder to know where you will end up at the end of the scroll or if you end up on the point where you wanted to scroll to.

In general, I much more prefer Unity or Godot’s tasteful minimalism on the UI instead of the straight-out flat “Visual Studio-ish” colors but at the end of the day, it has to be functional first and then look good. And it IS functional so nicely done! (also way better than unreal’s UI imo)

Other than that I just really wanted to thank you for this!
It’s not every time you see a new engine doing soo many things right with their first release, this has incredible potential and I wish the team all the best! <3

Also really sorry about the weird links, the forum wouldn’t let me attach all my media as I’m a new user.

Thanks for the feedback! Some of those items are already planned + I added more suggestions to Editor roadmap. Feel free to drop in more ideas! Welcome to the community